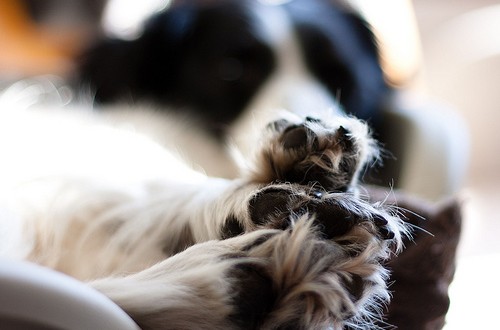 A New Therapy for Bone Cancer in Dogs: Oncolytic Treatment of Canine Osteosarcoma

Bone cancer in dogs (canine osteosarcoma) results in aggressive development of tumours on the canine skeleton, particularly below the knee or elbow. The rapid spread (metastasis) of the cancer means that even amputation of the affected limb may not be enough to prevent further development of the cancer. With the right treatment and care, around 25% of affected dogs will go on to live for another 2 years.

Researchers in the US are currently looking in to a new therapy for bone cancer in dogs, based upon a relatively new branch of science known as oncolytics.

The new bone cancer therapy uses a modified, ‘harmless’ virus to target only cancerous cells. The virus replicates within cancerous cells, destroying them and spreading around the body to other cancer cells. The modified virus has been engineered to leave normal, healthy cells untouched.

Canine osteosarcoma is an extremely aggressive cancer, as such, an unfortunate truth is that the outcome for the majority of dogs affected by the disease is not good. Research in to this new therapy for the treatment of bone cancer will therefore be greatly received by many.

Current treatment of bone cancer in dogs involves the amputation of the affected limb and chemotherapy to combat cancer cells that have spread around the body. Radiation therapy is sometimes used as a palliative therapy, which helps to reduce any pain that your dog may be experiencing.

For more information on bone cancer in dogs:

Dogs with osteosarcoma will often begin limping for no apparent reason as a result of the painful growth. Aggression, reluctance to exercise, weight loss and sleeplessness may follow. There may also be inflammation and swelling around the affected area. If you notice these symptoms in your dog, it is important that you visit your vet as soon as possible to rule out the possibility of osteosarcoma.

Oncolytics is a term given to the treatment of cancers with viruses. The new therapy being researched uses this model of cancer therapy to destroy cancerous cells.

Cancer sufferers are infected with an oncolytic virus, which will infect cancerous cells. After infection, the virus uses resources within that cell to replicate itself, creating many identical copies of the original virus. After this incubation period, the infected cancer cell becomes full of the replicated oncolytic virus and bursts open – killing that cancerous cell and releasing multiple copies of the oncolytic virus. The process continues and the virus replicates exponentially, spreading through the entire body.

Oncolytic viruses used for the treatment of cancers are attenuated versions of existing viruses that already display oncolytic properties. This means certain properties of the virus are removed to make the virus safer and to ensure that it only targets cancerous cells.

An in-depth guide in to oncolytic viruses can be found here.

See below for an example of how Reolysin®, a commercial oncolytic virus currently being manufactured by Oncolytics Biotech Inc., specifically targets cancer cells.

Cancers, such as bone cancer in dogs, will benefit greatly from oncolytics. The rapid spread of the cancer around the body will be matched by the spread of the virus, greatly reducing the threat of metastasis.

The Future of Oncolytics as a Cancer Treatment

Oncolytics is a very promising therapy for cancer patients, as such, there is a lot of research being done in to how best exploit these cancer-fighting viruses to help those suffering from cancer. There are also numerous oncolytic viruses currently undergoing clinical trials.

Be sure to leave your thoughts on the exciting research in to this method of cancer treatment in the comments below.

BSc Bioveterinary Science. Editor of PetSci. When I'm not writing, learning, discussing, or reading about animals, you know it's the weekend! Currently developing PetSci HealthTrak, the fast and easy way to monitor your pet's weight and calorie intake. HealthTrak offers a simple way to track your pet's progress, helping them achieve a healthy weight and a long, happy life.
@pet_sci
Previous A New Treatment for Canine Idiopathic Epilepsy: Pexion
Next Are Hypoallergenic Diets What They Seem?: Pet Food Allergies