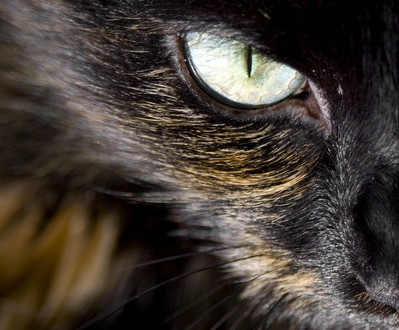 Cat Influenza (or cat flu) is not an infection by the influenza virus like human flu. Instead, cat flu is the term used to describe a variety of upper respiratory tract diseases.

In particular, feline herpesvirus (FHV-1) is one particular virus that causes cat flu. Whilst there are other causes of cat flu, FHV-1 is particularly interesting.

Typically, treating viral infections requires the use of antivirals, which act in a more ‘invasive’ manner than antibiotics. Research suggests however, that we may be able to treat FHV-1, with something as simple as an amino acid found in food.

What is Cat Influenza?

As mentioned earlier, cat (feline) influenza or cat flu is the name used to describe a range of upper respiratory tract infections – feline herpesvirus (FHV-1) is a major cause of cat flu.

FHV-1 induced cat flu is extremely contagious, despite the fact that it can only be transmitted by direct contact. The virus is shed in secretions from the infected cat’s nose, eyes and mouth – these secretions contain large amounts of the virus, which is what makes the disease so infectious.

The infectiousness of the virus makes catteries an extremely risky environment if one of the cats is infected.

Cats that have been previously infected with FHV-1 are highly likely to remain carriers of the virus. After recovering from the initial infection, the virus ‘hides’ in nerve cells – remaining dormant until the cat becomes stressed. When stressed the virus reactivates and the cat shows symptoms of cat flu once again (and again becomes infectious).

FHV-1 can cause severe disease, but mortality rates are much higher in kittens or young cats.

Cat flu is characterised by a number of symptoms, including:

Cats generally tend to recover from the initial infection relatively quickly, but whilst suffering from cat flu they are at increased risk of secondary infections – for example, many cats develop conjunctivitis caused by a pathogen other than FHV-1.

How Can Lysine Help?

Whilst there is no cure for an FHV-1 infection, there are ways to reduce flare ups of the disease and lessen the symptoms. Multiple studies have shown that Lysine, a simple amino acid found in a variety of foods can have a positive effect on the virus.

When given in large amounts (larger than the cat would typically consume in their natural diet), lysine antagonises another amino acid – arginine. This means that by increasing dietary intake of lysine, the amount of arginine in the body is reduced – but why is this important?

FHV-1, like other herpes viruses, is believed to rely on arginine to replicate in the body. If we can reduce the amount of arginine available to the virus, we can essentially reduce the rate at which the virus reproduces. This can reduce symptoms and the frequency of flare ups.

A summary of all the studies that have shown lysine to have a positive effect on treating FHV-1 can be found here:

Effects of dietary lysine supplementation on upper respiratory and ocular disease and detection of infectious organisms in cats within an animal shelter (note: requires subscription to view full article)

What are the Alternatives?

Vaccination: Whilst there is a vaccine available for the FHV-1 virus, it does not prevent infection but it can limit the severity of the disease and the infectiousness of infected cats.

Antivirals: Antivirals are known for having more severe side effects than antibiotics for example. Unfortunately there is no specific antiviral treatment for FHV-1. Some have reported positive effects using a variety of other non-specific antivirals however.

Antibiotics: Antibiotics will not treat the viral infection and are only used to treat the secondary infections such as conjunctivitis that often occur when FHV-1 in an infected cat flares up.

Are you living with a cat infected with FHV-1? What treatment is your cat on (if any)? How do you go about minimising stress to prevent flare ups? Did you vaccinate against FHV-1? Leave your comments below.

BSc Bioveterinary Science. Editor of PetSci. When I'm not writing, learning, discussing, or reading about animals, you know it's the weekend! Currently developing PetSci HealthTrak, the fast and easy way to monitor your pet's weight and calorie intake. HealthTrak offers a simple way to track your pet's progress, helping them achieve a healthy weight and a long, happy life.
@pet_sci
Previous English Setter at ‘Risk of Extinction’
Next Matching Outfits: Pets & Their Humans