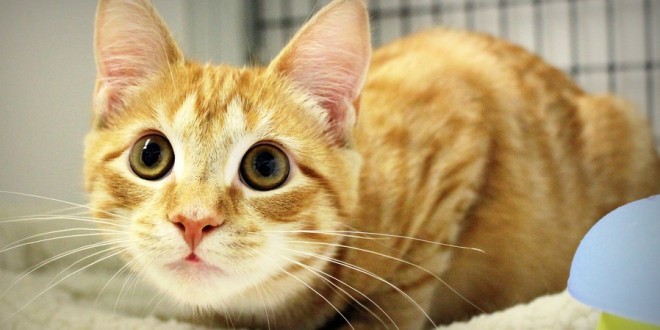 The two most common causes of feline upper respiratory tract infections are feline herpesvirus (FHV-1) and feline calicivirus (FCV), together these viruses account for more than 80% of all instances of cat flu.

See below for more about the symptoms of cat flu or the treatment of cat flu.

In this article, we are discussing infections of the upper respiratory tract (shown in red in figure 1), which includes:

Infections of the Feline Respiratory System

Feline upper respiratory tract infections are usually described with the single term ‘cat flu’. Cat flu can be caused by both viruses and bacteria, however, there are two viruses in particular that are associated with cat flu, these are:

Feline herpes virus is a major causative agent of cat flu. The virus is highly contagious and will cause persistent infection in over 80% of cats exposed to the virus.

Although the majority of infected cats will make a full recovery, the virus persists in a dormant state in nerve cells and can be reactivated during times of stress. Reactivation will result in the development of cat flu symptoms again.

Cats not displaying symptoms of an active upper respiratory tract infection can still shed the virus in discharge from the eyes and nose. This makes them an infection risk to other cats. Shedding of the virus can increase during periods of stress or following medication. This is a particular problem in catteries, shelters and multicat households, as an individual cat can appear healthy, but is able to spread the virus unknowingly.

Feline calicivirus is the second major causative agent of feline upper respiratory tract infections. In a similar manner to FHV-1, the virus is highly contagious and can be shed for long periods of time even after an individual cat recovers from the infection.

Two species of bacteria that are also commonly reported to have a primary role in causing cat flu are:

The exact symptoms of cat flu can vary slightly on an individual basis and also depending on which virus or bacteria is responsible for the infection.

Other methods for managing the acute infection include:

Antivirals may be an option in some extreme cases, but usually they are avoided for the treatment of cat flu due to price. No cat-specific antivirals are currently available, so human antivirals are used off-label.

Vaccination and Prevention of Infections Spreading

Core vaccinations for cats include FHV-1 and FCV (the two most common causes of cat flu). For maximum protection, cats should be vaccinated at 9 and 12 weeks of age and again 12 months after the first vaccination. See here for more information on vaccinating your cat.

Preventing the Spread of Infection

In the majority of cases, cats infection with either FHV-1 or FCV will carry the virus for life. Carriers of the virus can experience ‘flare-ups’, where the virus will become active again, causing cat flu symptoms. There are ways to manage infection however, to reduce the occurrence of flare-ups and minimise the spread of the virus.

Stress Reduction – Stress is the main reason for flare-ups and can also increase the amount of virus that is shed by an infected cat. Steps should be taken to minimise stress, particularly in multi-cat environments such as shelters and catteries.

Management – In places with large cat populations, steps should be taken to keep infected cats separate from healthy cats. This also applies in the multicat home environment. Vaccinate existing cats against the virus and considering isolating the new cat for 1-2 weeks in case symptoms of cat flu develop.

Sanitation – Standard disinfectant is enough to remove the majority of cat flu causing bacteria, as well as FHV-1. FCV however, is a more hardy virus that can last for a while in the environment and requires stronger detergents, such as bleach, to remove.

BSc Bioveterinary Science. Editor of PetSci. When I'm not writing, learning, discussing, or reading about animals, you know it's the weekend! Currently developing PetSci HealthTrak, the fast and easy way to monitor your pet's weight and calorie intake. HealthTrak offers a simple way to track your pet's progress, helping them achieve a healthy weight and a long, happy life.
@pet_sci
Previous Feline Lower Urinary Tract Disease (FLUTD)
Next Bob Martin to Tackle Permethrin Poisoning in Cats