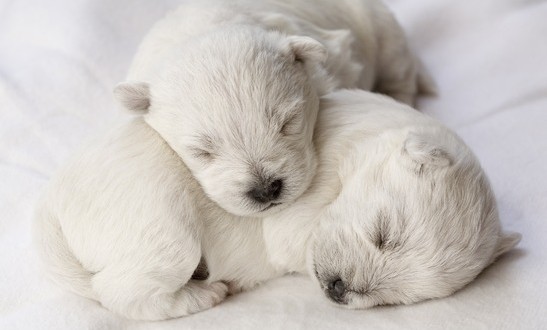 Canine herpesvirus (CHV) is a widespread viral infection, similar to the herpes virus found in other mammals such as ourselves. Canine herpesvirus has an extremely high prevalence (particularly in Europe), with rough estimates putting the total number of infected dogs anywhere between 40-90%!

The virus lies dormant in the nerve cells of an infected dog for the majority of its life, causing little, if any issues; however, the virus can be reactivated from time-to-time. Stress is a common cause of reactivation (much like cold sores in humans).

An infected adult dog is unlikely to suffer as a result of canine herpesvirus infection, however, they may experience respiratory distress when first infected and reactivation may lead to the onset of sores or the return of respiratory problems. Canine herpesvirus becomes a much bigger problem during pregnancy, as a connection between the virus and major reproductive disturbances has been identified. The first litter from an infected female is likely to have a low survival rate.

Compared to human herpesviruses, little has been established about canine herpes virus, despite its extremely high prevalence rate in both males and females. The consequences of being infected with canine herpesvirus remain largely unknown.

A dog becomes infected when they come in to contact with bodily fluids of a dog that is shedding the virus. The virus is mainly shed through discharge from the eyes, nose and genitalia. Canine herpesvirus is not airborne and cannot survive for long in the open environment, meaning close contact is required to become infected.

Once infected, a dog will usually suffer from mild respiratory distress, similar to a typical cold. Even after symptoms clear however, the virus remains as a latent infection i.e. the virus is still present, but hidden away from the immune system. Canine herpesvirus causes a latent infection of certain nerve cells and will remain dormant in those cells until reactivated.

Reactivation of canine herpesvirus usually arises as a result of stress. Examples include; pregnancy, lactation, immunosuppressant therapy or environmental stress such as moving house.

The primary site of infection is the reproductive tract, as a result, the disease can be sexually transmitted, but as mentioned earlier, the virus can also be spread by discharge from the eyes and nose. When the virus becomes reactivated, it may be possible to detect raised sores around the genitalia. Lesions have also be known to occur within the body, but these cannot be detected from the outside and require a necropsy.

Whilst the virus has typically mild consequences in an adult dog, the same cannot be said for puppies. Puppies that are infected with canine herpesvirus typically have a low survival rate.

Puppies can become infected either during whelping as they leave the birthing canal or through being in close contact with the mother when she is shedding the virus.

The virus is known to cause fatal haemorrhagic disease in pups less than 3 weeks old. Pups that survive go on to become latently infected or may even develop neurological diseases at a later date.

There is currently only one available vaccine for canine herpesvirus, which is only available in Europe. The vaccine, Eurican Herpes 205, contains tiny amounts of viral protein, which is enough to stimulate the mother’s immune system in to producing antibodies.

The female should be vaccinated once during heat and again 1-2 weeks before whelping. The second injection ensures that antibodies are transferred to the newborn pups via colostrum. This greatly increases their chance of survival.

There are strong indications that canine herpesvirus causes mortality in newborn pups, especially if female is infected during late pregnancy. Unfortunately, there is little that can be done to treat an infected newborn. Mortalities at 3 weeks or earlier are usually attributable to the virus.

The mother may appear well before pregnancy, but the stress caused by oestrus (heat), pregnancy or lactation can be enough to reactivate the latent virus. Reactivation can cause shedding of the virus, which is usually responsible for infection of newborn puppies.

The clinical effects of viral reactivation have not yet been fully clarified, however, reproductive disturbances and lower pup weights have been suggested. Other investigations of the virus show an apparent association between reactivation and reproduction hormone concentrations.

There is usually little that can be done to save infected newborn puppies during a mother’s first pregnancy, however, subsequent pregnancies are unlikely to be as badly affected, as the mother will produce sufficient antibodies to protect her pups.

Although further study is still needed, particularly as the group size was small in this study, the conclusion was that; good management during pregnancy did not result in canine herpesvirus related disturbances.

For more information on canine herpesvirus take a look at these guides:

BSc Bioveterinary Science. Editor of PetSci. When I'm not writing, learning, discussing, or reading about animals, you know it's the weekend! Currently developing PetSci HealthTrak, the fast and easy way to monitor your pet's weight and calorie intake. HealthTrak offers a simple way to track your pet's progress, helping them achieve a healthy weight and a long, happy life.
@pet_sci
Previous The Overweight Cat: Are we Feeding Cats Too Many Treats?
Next Is it Possible to Improve Feline Immunity through the Diet?