Canine benign tumours are non-cancerous masses of cells. Benign tumours (unlike malignant, cancerous tumours) generally do not spread and have a slow growth rate.

Although canine benign tumours are not cancerous, they can still have negative health effects. The most obvious health issue caused by benign tumours is their ‘mass effect’. The size of an unusual benign growth can cause compression on surrounding tissue. This can potentially cause nerve damage and reduce blood flow to the area resulting in tissue death. In most cases however, the tumour causes no obvious ill-effect.

In some rare instances, canine benign tumours can become cancerous as they develop, but the removal of the benign tumour is usually recommended before this occurs.

Canine benign tumours are highly diverse, there are many different types of growth. Some of the most common benign tumours that result in a visit to the vets include:

In the majority of cases, benign tumours are not harmful and do not cause your dog discomfort. As such, even though the tumours can look like a cause for concern, they can often be left alone without treatment. Treatment only becomes necessary if the growth causes an issue or if secondary problems, such as a bacterial infection, develop.

Despite this, it is still worth visiting your vet so they can accurately determine if the tumour is benign and whether further treatment will be required.

Canine lipomas are fatty benign tumours that typically develop just below the skin. They are an accumulation of fat cells that can develop almost anywhere on the body.

Lipomas are more likely to occur in older dogs around 8+ years old. Dogs that develop a single lipoma are more likely to develop multiple growths, however, this does not indicate that the growth has metastasised (become cancerous).

Lipomas are typically not painful, but this depends on where they form. For example, a lipoma that develops in the armpit region may cause pain as the dog walks. In instances like these, removal is recommended.

They are usually round or oval in shape and relatively small in size, but can reach a diameter of a few inches wide.

As a lump on your dog could potentially be one of many things, diagnosis involves taking a sample of the growth to be tested. If only fat cells are found in the sample, this indicates the growth is a lipoma.

If the lipoma is only a cosmetic issue and there are no issues concerning the welfare of your dog, your vet will recommend that the growth does not need to be removed. The risk and cost of surgery usually outweigh the benefit of removing the tumour.

If the lipoma is causing problems (for example, a lump on the neck that may make breathing difficult), the lipoma can be surgically removed with under local or general anaesthetic. Liposuction has also been used successfully as a less invasive removal procedure.

Lipomas can become an issue if the fatty tumour spreads in to other connecting tissue. When this happens, the tumour is classified as an infiltrative lipoma. Infiltrative lipomas are more of a problem as they can cause pain and make walking/movement difficult.

Infiltrative lipomas are more difficult to remove completely due to their spread in to other tissues – however, they are still considered benign.

As infiltrative lipomas are more likely to regrow, due to the difficulty in completely removing the growth by usual means, they may require radiotherapy to remove the tumour completely.

As lipomas are more prone in obese dogs, monitoring your pet’s weight and helping them with weight loss is considered an important preventative therapy.

See Dogaware for more information about lipomas and some of the alternative therapies that are used. 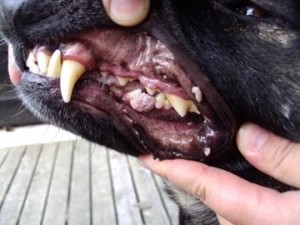 Canine papillomas are benign growths similar to warts found on humans. The growths are small, round and have a rough texture. They are usually found in groups in/around the mouth are, although they can develop on other parts of the body, such as the paw pads or eyelids.

The growths are caused by the canine oral papilloma virus, which is non-transmissible to humans.

Papillomas are most likely to affect younger dogs around the age of 2. This is because younger dogs will not have a strong immune reaction to the virus. An infected dog can spread the virus to other dogs through broken skin. Once infected, it can take 1-2 months for the virus to incubate and cause papilloma growths.

The growths are harmless and will usually disappear over the course of a few months as the dog’s immune system develops and fights off the papilloma virus. Occasional some growths may remain.

Like with other benign tumours, treatment is only required as a result of secondary complications. Complications include bacterial infection or numerous oral growths that make eating difficult.

Papillomas can be surgically removed or frozen off with cryogenic treatment. 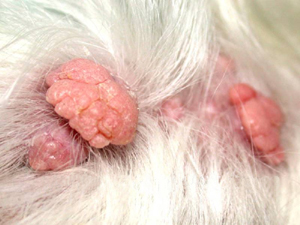 Canine sebaceous adenomas are benign tumours that affect the sebaceous (oil producing) glands, which lubricate and waterproof the skin and fur.

Canine sebaceous adenomas have a wart-like appearance, but unlike warts, they are not caused by a virus.

Again, it is not necessary to remove these tumours unless they are the specific cause of a secondary problem. Due to the fact they can develop anywhere on the skin, they can sometimes be easy for your dog to scratch, which can cause bleeding and infection. In this case, removal of the tumour is probably necessary.

Canine benign tumours are usually just a cosmetic issue and completely harmless. However, they should be regularly monitored to ensure that they don’t begin to grow rapidly and that they aren’t causing your dog any pain or other issues.

Although the tumours can be ignored in most cases, it is still always recommendable to visit your vet to rule out any possibility of a cancerous growth or other health implication.

If you’d like to see a specific type of benign tumour covered in a future article, or if you have any questions, experiences or advice, please leave a comment below.

BSc Bioveterinary Science. Editor of PetSci. When I'm not writing, learning, discussing, or reading about animals, you know it's the weekend! Currently developing PetSci HealthTrak, the fast and easy way to monitor your pet's weight and calorie intake. HealthTrak offers a simple way to track your pet's progress, helping them achieve a healthy weight and a long, happy life.
@pet_sci
Previous The Pawtrack GPS Collar for Cats: 2013 Update
Next Treating Motion Sickness in Cats and Dogs 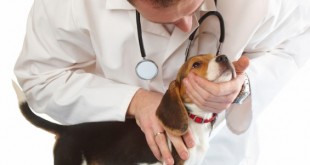 The 10 Most Common Canine Health Problems 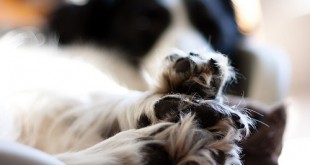 A New Therapy for Bone Cancer in Dogs: Oncolytic Treatment of Canine Osteosarcoma