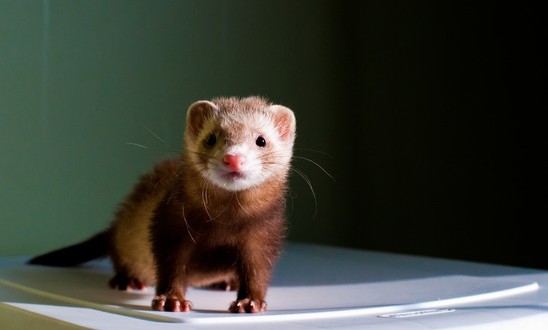 Outbreak of Canine Distemper in Ferrets – Trouble Ahead?

Veterinarian, Simon Thomas recently wrote to the Veterinary Record to warn of an great increase in the number of ferrets being diagnosed with canine distemper in the UK.

Over 300 cases of canine distemper have now been reported in ferrets since October 2011 and with no licensed vaccine available many ferrets have gone without vaccination in recent years. Veterinarians are however able to use medications, including vaccines, intended for other species in accordance with ‘the cascade’. This ‘off-label’ method of prescription means that veterinarians would be able to administer canine vaccinations (for canine distemper) to ferrets if they consider it necessary. (See here for more information on the Veterinary Cascade)

Clinical signs of canine distemper in ferrets include; skin rash, discharge from the eye and nasal crusting. The number of fatal cases is reported to be high.

Canine distemper (CD) is known to affect members of the Mustelidae (weasel) family, which includes ferrets. CD is primarily associated with dogs and ferrets, however prior to October 2011, the number of cases reported in ferrets was relatively low. CD is a viral disease that is comparable to measles in humans, with a mortality rate of around 50% (even higher in puppies).

Treatments for CD remain in their infancy with the emphasis being placed on prevention by vaccination.

Ferret owners should not worry, but be extra vigilant for the occurrence of the symptoms described above. Those concerned should speak with their veterinarian. It is likely that if the outbreak continues, vaccination production for CD will be increased.

BSc Bioveterinary Science. Editor of PetSci. When I'm not writing, learning, discussing, or reading about animals, you know it's the weekend! Currently developing PetSci HealthTrak, the fast and easy way to monitor your pet's weight and calorie intake. HealthTrak offers a simple way to track your pet's progress, helping them achieve a healthy weight and a long, happy life.
@pet_sci
Previous Stay Safe With Dog-e-Glow LED Collars and Leads
Next Is Your Dog Suffering From Stress?