The genetic diversity of the English Bulldog is now so limited it could be difficult to improve the health problems associated with the breed.

Selective breeding of the English Bulldog for specific traits has been carried out by humans for many years. This has caused large changes in the genome of the Bulldog, which now put it at the top of the list for unhealthiest breeds.

As a result of this selective breeding, regions of the English Bulldog’s genome have lost diversity. There is so little diversity within the current English Bulldog genome that improving the breed’s health may no longer be possible without crossing with other breeds (outbreeding).

“The English bulldog has reached the point where popularity can no longer excuse the health problems that the average bulldog endures in its often brief lifetime. More people seemed to be enamoured with its appearance than concerned about its health.”
Niels Pedersen, Center for Companion Animal Health

The inbreeding of English Bulldogs that has occurred over hundreds of years has accelerated recently. This is a result of breeders selecting for specific physical traits, for example the rare coat colour phenomenon.

Is it Possible to Improve the Health of English Bulldogs?

English Bulldogs got off to a bad start in genetic terms. The breed started from a relatively small genetic base. With an estimated founder population of only 68 individuals, genetic diversity was limited from the beginning.

Attempting to breed out harmful traits, such as the breed’s short snout, could reduce diversity even further.

A DNA analysis of 139 English Bulldogs from the US and other countries was conducted to assess the current genetic diversity of the breed. The study confirmed that the breed is greatly lacking in genetic diversity. This means breeders will struggle to produce healthy dogs from the existing ‘genetic stock’ 1.

A survey of 180 English Bulldogs looked into their cause of their death. The average lifespan of the dogs in the survey was 6 years 2. The top three causes of death are listed below:

The survey also looked at the health status of 403 English Bulldogs. 46% of the dogs had at least one health condition.

Breeding English Bulldogs is particularly difficult due to their small litter sizes and the frequent need for caesarean section delivery of pups.

The breed is also a notorious brachycephalic breed, meaning they have difficulty breathing and can overheat easily.

Brachycephalic syndrome in the English bulldog is a complex disorder. Breeds such as the Boxer are similarly brachycephalic but do not suffer to the same degree.

In the case of the English bulldog, the nostrils are narrow, the base of the tongue is large and broad, the palate elongated and thickened. This makes blockage of the throat a common problem, especially during sleep. The trachea of English Bulldogs are usually narrow, this creates further complications for normal breathing.

The constant pressures on the upper airways created by these obstructions can also cause further issues.

Breathing complications and problems controlling their body temperature has lead to many brachycephalic breeds, including the English Bulldog to be banned from travelling on a number of airlines.

What Does the Future Hold for the English Bulldog?

Changes to breed standards brought in by The Kennel Club in 2009 have paved the way for improvement to the breed. However, with the limited genetic diversity available, the future health of the English Bulldog is still in trouble. 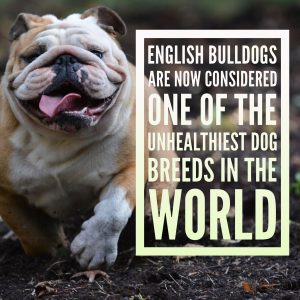 British Bulldog Council chairman Robin Searle spoke out about the proposed changes in 2009, saying “What you’ll get is a completely different dog, not a British bulldog.” Ryan O’Meara, from the K9 dog magazine explains, “The public must be educated to see dogs not for their aesthetic appeal but to think about their health. People shouldn’t be scared or snobbish about interbreeding”.

The Swiss Continental Bulldog is an example of interbreeding and offers a solution to the problem of bulldog ill-health.

Buyers of English Bulldogs should only purchase dogs from reputable breeders. A reputable breeder is always looking to produce better, healthier dogs with each generation. Through careful breeding, the impact on the health of the breed can be minimised, a suitable solution for the interim.

An unfortunate reality is that a ‘completely healthy’ English Bulldog might never be possible. In which case, for the sake of the dogs’ health, we may have to say goodbye to this iconic breed as we know it.

BSc Bioveterinary Science. Editor of PetSci. When I'm not writing, learning, discussing, or reading about animals, you know it's the weekend! Currently developing PetSci HealthTrak, the fast and easy way to monitor your pet's weight and calorie intake. HealthTrak offers a simple way to track your pet's progress, helping them achieve a healthy weight and a long, happy life.
@pet_sci
Previous Whelping Essentials: Preparing for your Dog’s Pregnancy
Next Cats Can Learn About the Nutritional Value of Their Food 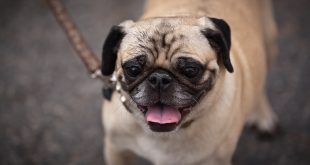 Flat faced dog breeds, such as the much loved pug, are increasing in popularity. Unfortunately, …