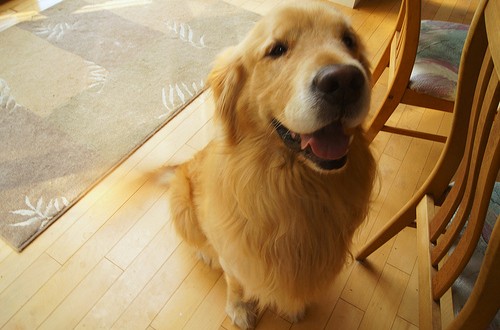 Ever wondered why your dog gets so excited when you come home?

If you’ve ever wondered why your dog seems so excited when you return home then a new study might just have the answer.

The calming effect dogs can have on humans has been quite well documented. Stroking or petting your dog can alleviate stress and dog ownership is thought to improve our quality of life, but what about the effect of humans on dogs?

How do different social interactions affect our dogs? Do we help alleviate their stress? A recent Swedish study investigated the biological mechanisms behind why our dogs get so excited to see us!

The study investigated how a number of dogs responded to different social interactions with familiar humans after being separated. The dogs were placed in one of three groups:

In each scenario, the dogs were separated from a familiar human for a short period. This individual then returned, approached the dog and engaged in one of the interactions listed above for four minutes.

The behaviour of each dog was recorded along with the concentrations of two important hormones that help to investigate affection and stress; oxytocin and cortisol.

Oxytocin has an important role in human to human social interaction. It also has a similar role in other primates as well as dogs.

The release of oxytocin helps to promote attachment between individuals. It also strengthens social bonds and trust, whilst decreasing anxiety and levels of cortisol.

Cortisol is a hormone closely linked to stress, high levels of cortisol are indicative of either emotional or physical stress.

It is released by the body as a quick-fix coping mechanism that can help deal with certain stressful situations, however, when cortisol is present in high levels for an extended period of time, it can cause problems.

High levels of cortisol can negatively affect the body, for example, it can impact on the efficiency of the immune system and increase blood pressure. It has also been linked to increased likelihood of depression.

The Positive Effects of Human Interaction and Reunion

The outcome of this experiment showed that the return of a familiar human had a positive effect on the dog. Increasing oxytocin and decreasing cortisol. This was observed even in the group that received no physical or verbal interaction.

Dogs that received both physical and verbal interaction had a significantly higher level of oxytocin, that was maintained for much longer. Similarly, cortisol levels were significantly lower for longer.

The release of oxytocin helps reaffirm the social bond between dog and owner.

So, when we come home after a long day and are excitedly greeted by our dogs, it’s because we are able to provide them emotional satisfaction. It’s interesting to see that we are able to share this innate social response across species barriers. It’s not just a one-way response either, something as simple as sharing eye contact with our dogs has been shown to cause a boost in our own oxytocin levels, read more about that here.

BSc Bioveterinary Science. Editor of PetSci. When I'm not writing, learning, discussing, or reading about animals, you know it's the weekend! Currently developing PetSci HealthTrak, the fast and easy way to monitor your pet's weight and calorie intake. HealthTrak offers a simple way to track your pet's progress, helping them achieve a healthy weight and a long, happy life.
@pet_sci
Previous Canine Periodontal Disease: Does my dog have gum disease?
Next Treatment and Advice for Soft Tissue Trauma in Canines