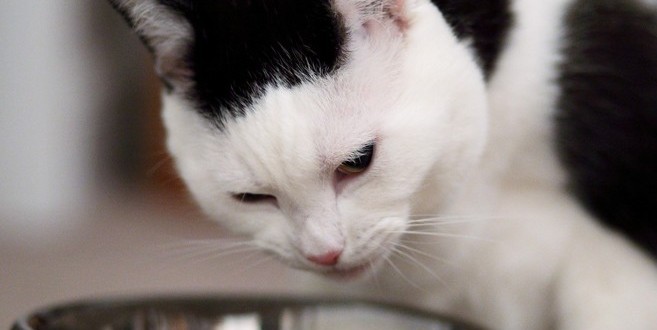 Could Some Cat Foods Contribute to Feline Hyperthyroidism?

The amount of cats that have been diagnosed with hyperthyroidism in the last three decades has increased, and surprisingly fish flavoured cat food could be the culprit.

Hyperthyroidism is a condition that occurs when the thyroid gland produces an excess of hormones. Excessive amounts of these thyroid hormones can cause thyrotoxicosis. It has previously been thought that cats being exposed to flame retardants and many other factors may be the cause of this unusual increase in hyperthyroidism. However, research which has been printed in ACS’ journal Environmental Science & Technology conducted by the American Chemical Society says otherwise, and names blame to another source – fish-flavored cat food. 1

Some of the symptoms of hyperthyroidism in cats include: an increased metabolic rate (which causes weight loss), high blood pressure, vomiting, diarrhoea, increased thirst (which in turn causes increased urination), and in extreme cases hypertrophic cardiomyopathy (heart disease).

“While diagnosing and treating hyperthyroidism is relatively straightforward, identifying the disease’s cause is not.” says Dr. Jennifer Coates, an expert in veterinary medicine, pet care, and the human-animal bond.

Hazuki Mizukawa, Kei Nomiyama, Susumu Nakatsu, and other researchers at the American Chemical Society have led the charge in research to find out what products we should and shouldn’t be feeding to our feline friends. Previous studies have thought that polybrominated diphenyl ethers (PBDEs) may be the cause of the problem – these compounds have already been banned in Europe and elsewhere due to toxicity concerns. 2 Environmental PBDEs were ruled out however, after tests indicated the high levels of byproducts that may cause hyperthyroidism were more likely due to fish-flavoured cat food.

The study suggests that pet cats are exposed to PBDEs through cat food products containing fish flavors and that the (OH-)PBDEs found in cat blood are derived from naturally occurring (MeO-)PBDE compounds found in marine organisms, not from environmental PBDEs primarily used as flame retardants in electronic devices. 3

You might be asking yourself: “Wait just a minute, isn’t Hyperthyroidism just something that happens to humans?” Well, it does happen to humans, but it also occurs in cats and dogs. Hyperthyroidism is a condition that is very common for older domesticated house cats. It is estimated by veterinarians that the condition occurs in about 2% of cats who are over the age of 10. 4

While it isn’t necessary to run straight to your cat’s food and throw it all out, it might be worthwhile considering switching to a cat food with a different flavoring for the time being

Like most incomplete studies, more data is needed before making any conclusive statements. It should be noted however that both dry cat food with fish-flavoring or canned fish-flavored cat food have been implicated by this study. The researchers say further work is needed to clarify whether these metabolites specifically contribute to hyperthyroidism.

Everyone wants the best for their cat’s health, and so it is recommended that you do your research into which cat foods are best for your cat. Let your cats try different food too and let them identify their favorite meal! I am sure you will know which one is their favourite when they go running to their bowl every meal time!

BSc Bioveterinary Science. Editor of PetSci. When I'm not writing, learning, discussing, or reading about animals, you know it's the weekend! Currently developing PetSci HealthTrak, the fast and easy way to monitor your pet's weight and calorie intake. HealthTrak offers a simple way to track your pet's progress, helping them achieve a healthy weight and a long, happy life.
@pet_sci
Previous Are Your Pets at Risk When You’re Home with the Cold or Flu?
Next Are Your Pets Keeping You Awake or Helping You Sleep?