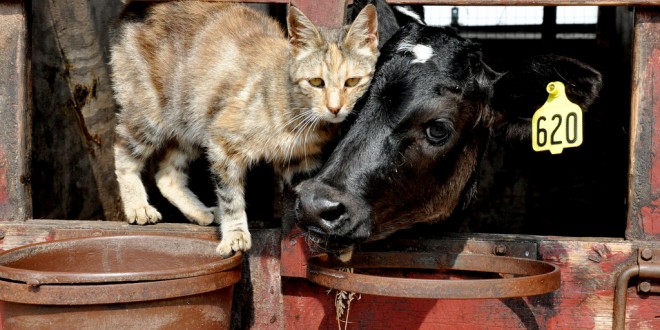 A news release from Public Health England and the Animal Health and Veterinary Laboratories Agency confirms that two people in England developed bovine tuberculosis (bTB) following contact with an infected domesticated cat. The cat was infected with Mycobacterium bovis (M. bovis), the bacterium responsible for causing TB in cattle.

A further two people were found to have a latent infection, suggesting they had been exposed to the disease at some point. Nine cases of bTB in domestic cats were investigated. All these cases were reported in the Berkshire and Hampshire area since March 2013, no further cases have been reported.

“TB caused by M. bovis is diagnosed in less than 40 people in the UK each year. Testing of nearby herds revealed a small number of infected cattle with the same strain of M. bovis as the cats. However, direct contact of the cats with these cattle was unlikely considering their roaming ranges. The most likely source of infection is infected wildlife, but cat-to-cat transmission cannot be ruled out.”

The recommendation from the Chief Veterinary Officer Nigel Gibbens regarding the matter is that cats diagnosed with an M. bovis infection should be euthanased. Although this may seem extreme, there is currently a lack of drugs licensed in the UK that can effectively treat TB in companion animals. Euthanasia is currently the best option for minimising the risk of infection to other animals or humans.

Tuberculosis (TB) is a bacterial infection caused by a genus of bacteria known as Mycobacterium. The infection can be serious and in humans, requires long term antibiotic treatment. The infection primarily causes respiratory problems. See here for NHS advice on M. tuberculosis infections.

Mycobacterium can infect nearly all mammalian species, including farm animals, pet and humans. Typically the species responsible for infection in humans is M. tuberculosis, whist M. bovis primarily affects cattle (bovine TB). Bovine tuberculosis is a zoonotic disease, one which can be spread from animals to humans.

TB infections in humans caused by M. bovis makes up less than <1% of total TB infections.

Cats or dogs can become infected with M. bovis when in close proximity to infected livestock, however, there are other routes of infection. An infection will likely develop if a pet consumes infected meat (from M. bovis infected wildlife carcasses), or if a pet is bitten by another infected animal. The bacterium can also survive in the environment, so open wounds are another entry route for M. bovis.

The number of confirmed M. bovis infections in companion animals has steadily been rising over the past few years (see figure 1.) 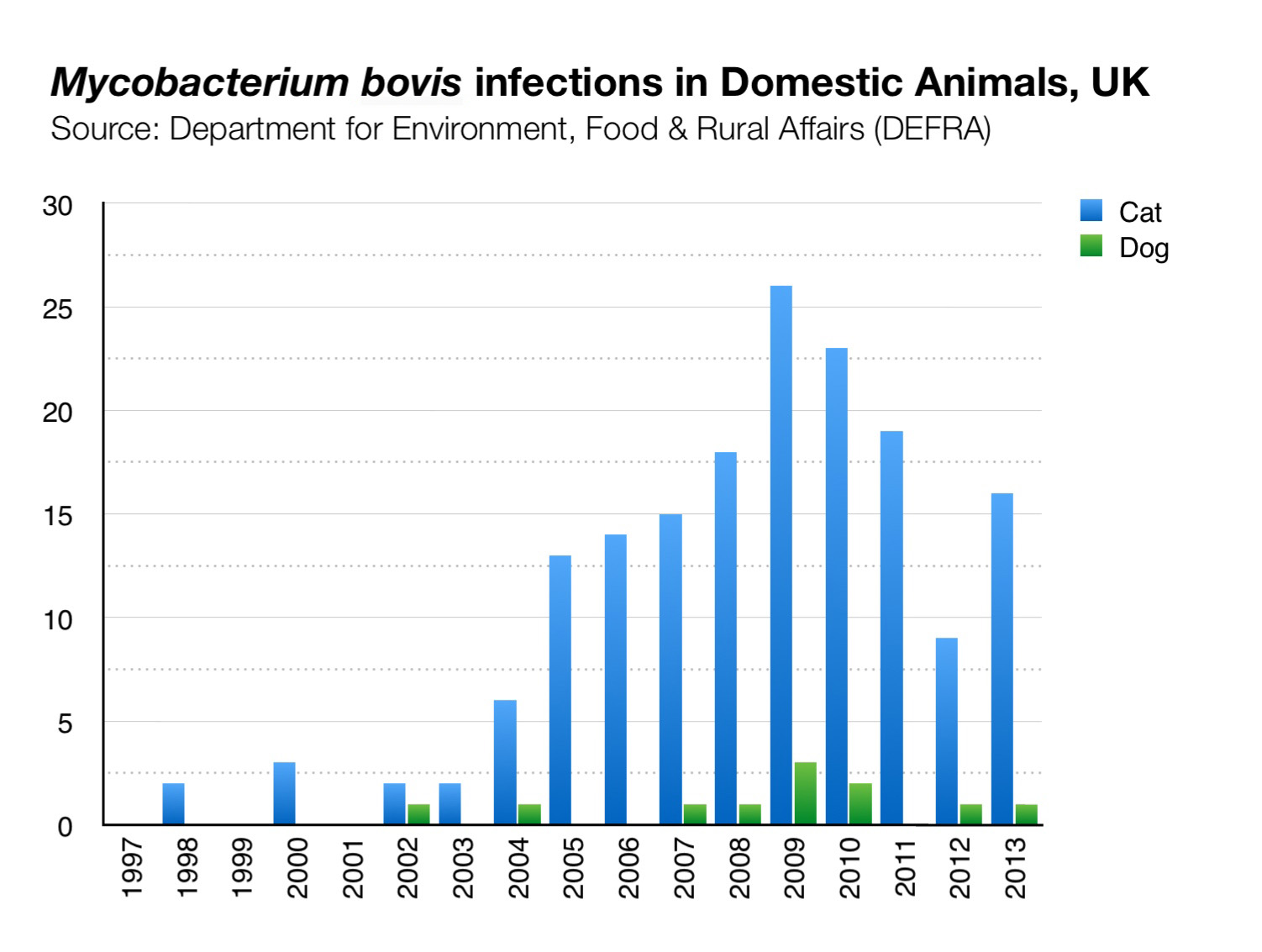 Transmission of Bovine TB from Pets to Owners

Although tuberculosis in humans has remained relatively low due to vaccination programmes, antibiotics and the pasteurisation of milk, farmers still have a risk of developing an M. bovis infection due to their proximity to livestock that carry the bacteria. Also vulnerable are the elderly and people who choose to consume unpasteurised (raw) milk.

This recent report of cat to human transmission highlights another potential risk, where M. bovis is transferred by an intermediate vector such as a cat. Transmission of M. bovis from a pet to their owner occurs when bacteria from an infected pet enters through an open wound or by being ingested or inhaled. The risk of pet to human transmission is still considered to be low.

As with domesticated pets, the number of M. bovis infections in humans is also on the rise (see figure 2). 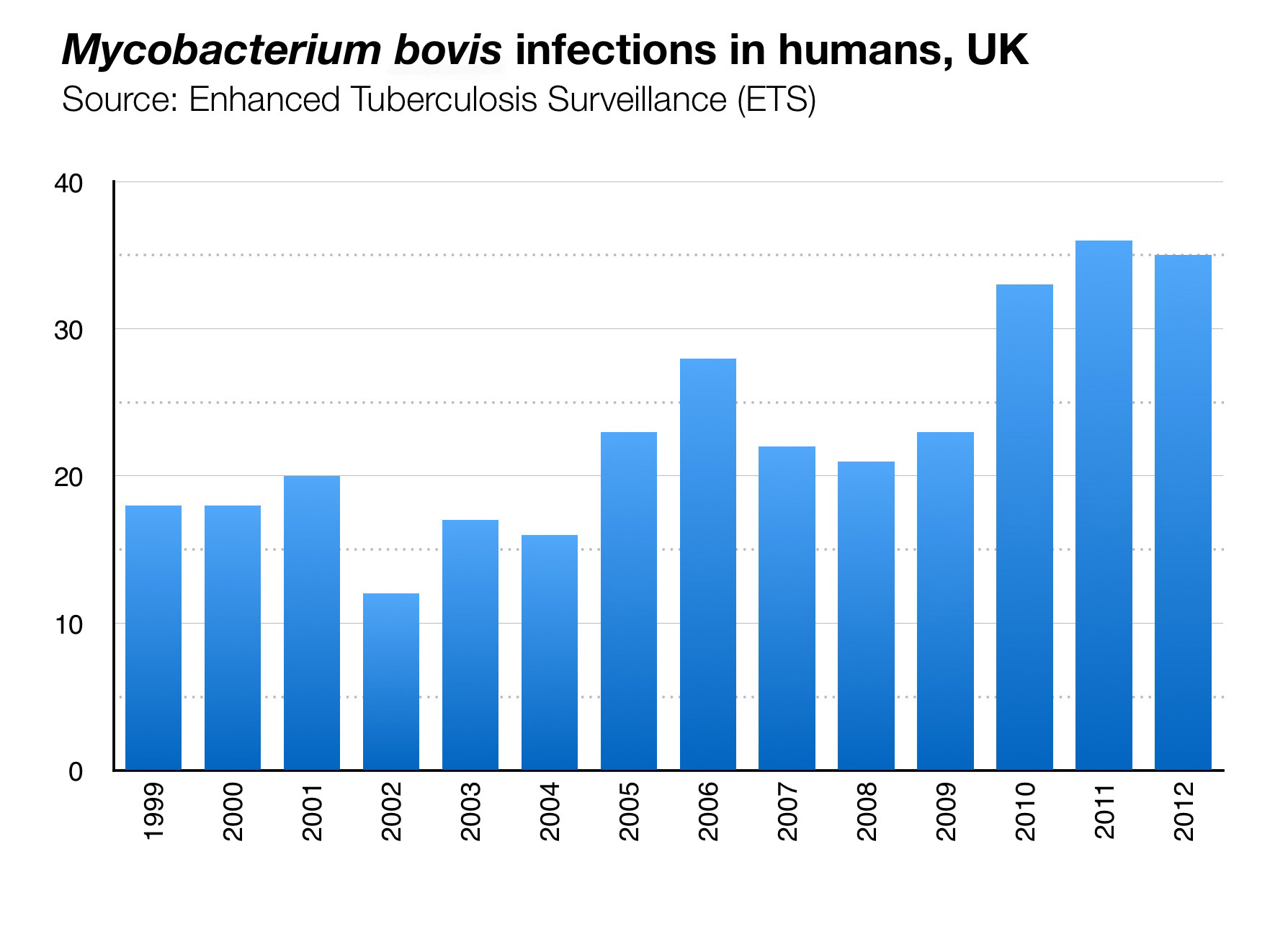 Diagnosing and Treating Tuberculosis in Cats and Dogs

Symptoms of tuberculosis in dogs and cats are similar to humans and include:

These symptoms are not unique to tuberculosis however, so diagnosis will require laboratory diagnostic tests. Any suspected case of M. bovis infection in pets will be reported to the AHVLA. In certain circumstances, testing may also be offered to humans who have been in contact with the infected animal.

It is recommended that any pet with tuberculosis is euthanased. This is due to the lack of effective licensed drugs for the treatment of TB in companion animals. Although your vet can prescribe unlicensed antibiotics, their safety and efficacy cannot be guaranteed. The risk of infection spreading further, including to the owner, should also be considered. Despite this, euthanasia is at the discretion of the owner.

BSc Bioveterinary Science. Editor of PetSci. When I'm not writing, learning, discussing, or reading about animals, you know it's the weekend! Currently developing PetSci HealthTrak, the fast and easy way to monitor your pet's weight and calorie intake. HealthTrak offers a simple way to track your pet's progress, helping them achieve a healthy weight and a long, happy life.
@pet_sci
Previous The 10 Most Common Canine Health Problems
Next PFMA Pet Obesity Report 2014: A Nation of Fat Cats and Dogs